When I was diagnosed with Breast Cancer I quickly found out that I was going to have things relatively easy. In less than three weeks from my diagnosis I had a lumpectomy which removed a very small, low-grade tumor and almost certainly removed every trace of the cancer. This past Monday I started the radiation that will make sure any lingering microscopic cancer cells are gone from my left breast. Two small, neat scars from the surgery are the extent of my side effects so far. I might possibly have a little bit of mild short term fatigue from the radiation towards the end of treatment. I’ve had one week of radiation so that means I have 5 more weeks, 5 days a week, to go. The first five weeks they treat my entire left breast – they created the plan to be very directed and avoid my heart and lungs. The last week has a “boost” that focuses radiation just on the area where the .9cm tumor was. I see the radiation oncologist, Dr. Kuhn, every Tuesday right after the radiation treatment so she can make sure the treatment is going well.

On the first day of treatment I wore my green cowboy boots. Everyone from radiation check-in to the radiation techs raved about the boots. As a bonus they match the green hospital gowns they have us change into. It’s nice to have something positive to think about because walking past a waiting room full of people waiting for chemo treatments on my way to the elevator down to radiation can be a bit depressing. I feel guilty about having it so much easier than they do. 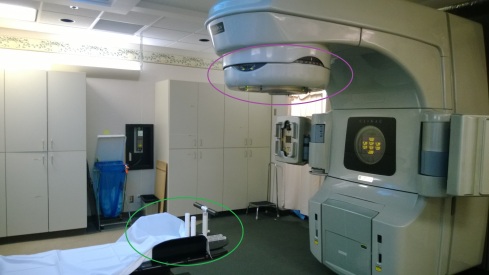 The purple section rotates and is where the radiation comes from

The daily treatment is very fast and easy. Before my first treatment they put three freckle sized tattoos, literal pin pricks of blue ink, on my body. Every weekday morning at 9am I go in, lay face-up on a table, and put my hands on the handles behind my head (see the green circle on the picture). They move the sheet under me to get the laser on the ceiling to line up with the three tattoos so the radiation is directed at the correct area. Then the entire machine rotates – the section circled in purple ends up at an angle about a foot above my right side, facing the inside of my left breast. I hear some whirring noises for about a minute – that’s the radiation being dispensed. Then it rotates to be even with my left side, the radiation tech shifts the table a bit, and the machine whirrs again for about a minute. That’s it. I get changed from my hospital gown into my clothes and go home. Fast, easy, painless. It’s amazingly simple and the techs are very friendly and answer all my questions.

The hardest parts are getting there on time each day and not being able to wear deodorant or antiperspirant. I have to use their hospital grade lotion and increase my protein intake but otherwise my life is very normal. Everything is easy and my great circle of friends has been incredibly supportive! I’m very lucky and happy to be getting on with my life!

Friday as part of my lumpectomy they took out two lymph nodes to check for any spread of the cancer. They are called “sentinel nodes” and are found via radiation. After they inserted a “localization” wire in my left breast to guide the surgeon to the tumor they took a couple of mammogram pictures, put me in a wheelchair with the images in hand, and pushed me down to Nuclear Medicine room #1. Rick took over once I was in that room and thoroughly explained each step that would be happening. He started with warning me yet again that I would be peeing Bronco blue for a day or so. The radioactive dye is tinted blue and it works its way out as blue urine – because Boise State is such a big deal in Boise everyone gleefully tells me I’ll pee BSU Bronco Blue as if I’m a Bronco fan (I’m a Boomer Sooner!) and somehow that will make it more normal.

Rick commented on how pleasant it is to have a patient that is positive and upbeat. He totally understands why so many people come through upset and tense but he enjoyed having me in there asking questions and looking forward to the future. I imagine it must be pretty bleak dealing all day every day with people who are facing uncertain or negative futures but Rick said he really liked his job and enjoyed learning new things all the time as the technology grew and changed.

The radiologist, Dr. Leymaster, came in and again warned me about the blue pee. I guess it must have freaked someone out at one point. Everyone along the way warned me – nurses, technicians, admissions people, doctors. Maybe they just enjoy talking about it. Then they had me lay down on the machine and the radiologist injected Lidocaine then the radioactive material – less than I will get when I fly to Seattle this week.

The radiologist left the room and the technician Rick pushed me under the imaging part of the machine. Since I was so interested in what was going on he made sure I could see the screen during the procedure and explained what was going on. The two big spots on the screen are the two injection spots just above and below my areola. Because this picture is so soon after the shots most of the radioactive material is still in the injection sites but will eventually work its way through my lymph system and out of my body – as blue pee of course.

The point though is to find the “first” lymph node or two that my breast drains to. The nurse explained that lymph nodes are like a pearl necklace – when you lay a string down in a clump it’s hard to tell where the “beginning” is. That “pearl necklace” is what is in the average armpit – a big mixed up mass of lymph nodes with no easily found beginning. The lymph fluid drains in a specific order, they are all connected with a single channel. The radioactive dye drains from the breasts in the same order as lymph fluid so where ever it goes first is where any cancer would go first. They can remove just the first couple of “sentinel” nodes and biopsy them – if they are free of cancer then the rest of the lymph nodes should be cancer free as well. After about 10 minutes Rick pointed out for me the small clump of radiation “above” the injection sites that indicated the fluid was clumping in a node – the first sentinel node. He then “drew” an outline of my body on the screen.

The radiologist came back in and used the Geiger counter along with the pictures to mark a spot in my armpit for the surgeon to remove the sentinel nodes. Rick had told me the machine would sound like R2D2 and in a way it did – as the machine got closer to the node with the dye it did beep and gurgle.

We finished up by looking at the higher resolution computer image and Rick showed me all the cool colors he could add to make the output more readable. We settled on green (of course!) for my pictures. The two biggest spots are still the injection spots and the spot just to the right and above is the node. The other dot further above is just an artifact of the process of drawing the outline of my arm – it is not a drainage spot. The line on the right is where he “drew” outside my rib cage and up under my armpit.

By the time of my surgery the dye had spread out a bit more but they already knew where the first node was. We won’t know for sure until the pathology results are back on Tuesday but the preliminary indications are that there is no cancer in the lymph nodes and I will be fine. And yes, I did pee blue the day after surgery….